In this article, you’ll learn…

Galileonet.it is a famous online science journal in Italy which has a long history (in internet terms) as it went online in 1997.

Since 1997 Galileonet.it has been one of the most important sources of information for science, medicine and space in Italy and throughout the years millions of readers have used it to get informed thanks to its quality content.

Google and direct are, for Galileonet.it, the firsts sources of traffic, like the majority of the publishers in the world. Gallieonet.it, like many publishers as well, found it difficult to retain part of the traffic it got from Google.

To resolve this problem the Galileonet.it newsroom tried Facebook and Twitter experimenting with different approaches but they weren’t happy with the results.

Elisa Manacorda, editor in chief of Galileonet.it came to us and we had a conversation about this problem. We proposed News@me as a solution. Galileonet.it created an account on News@me 11 months ago, and with this case we will tell you what’s happened so far.

Like many publishers Galileonet.it wanted to find a way to get a new source of traffic, a source that they could manage and integrate with the other sources like Google and Facebook.

We promised that after 1 year of using News@me Galileonet.it could find a new strong source of traffic, and high quality traffic at that.

We thougt that News@me could help the Galileonet.it newsroom understand their readers, way better than they could do by only using Google Analytics”.

“I wasn’t sure that News@me could really help us because I didn’t see anything similar on the market and the News@me guys were promising me really incredible numbers in terms of subscripion and traffic.. At the same time I knew that we should try something different to improve the experience of our readers, give them more without having to spend so much money. So I decided to try it.”

”We installed News@me on Galileonet.it at the end of May 2013 and then we analyzed the results of this integration”.

News@me works like that: a simple invitation with a minimalistic design catches the attention of the readers at the end of each article and converts this attention into a subscription, asking:

If you want to receive news about {title of the article} please subscribe using the box below. Here is an example of the widget: 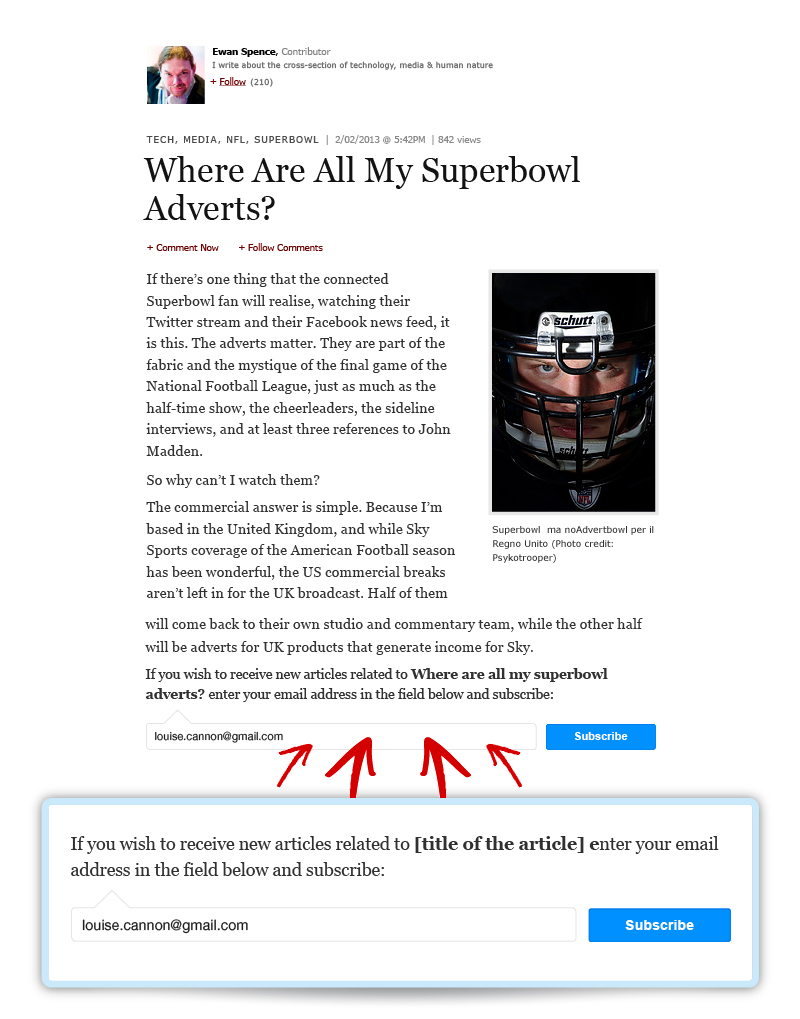 This allowed Galileonet.it  to create a unique bond between visitors and the Galileonet’s newsroom publishing activity based on something valuable: their interests, passions and curiosities.

News@me works with tags and it links every subscription to the tags of the article. So, when the Galileonet.it newsroom creates a new article they can choose the tags and they can see how many people are following those tags.

The screenshot shows the News@me tags area in the Galileonet.it content management system: 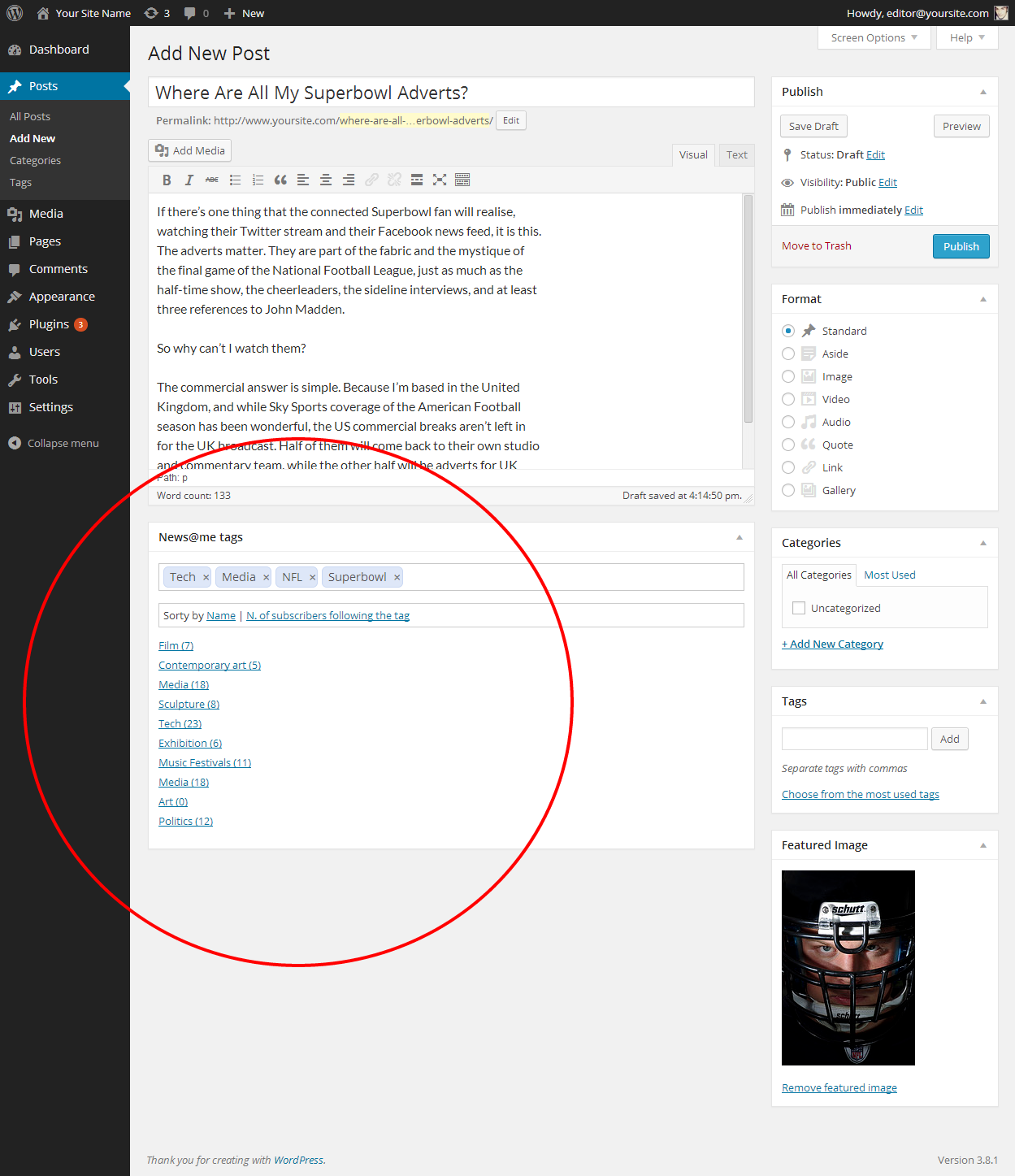 ”From day one Galileonet.it successufully collected new subscribers and it was pretty amazing because many occasional visitors were subscribing to Galileonet.it through the News@me widget at the bottom of the articles”.

They started on 16 May 2013 and that day they collected 12 new subscribers with less than 2,200 visits. The screenshot below shows the analytics of that day:

The screenshot below shows the analytics of News@me that day: 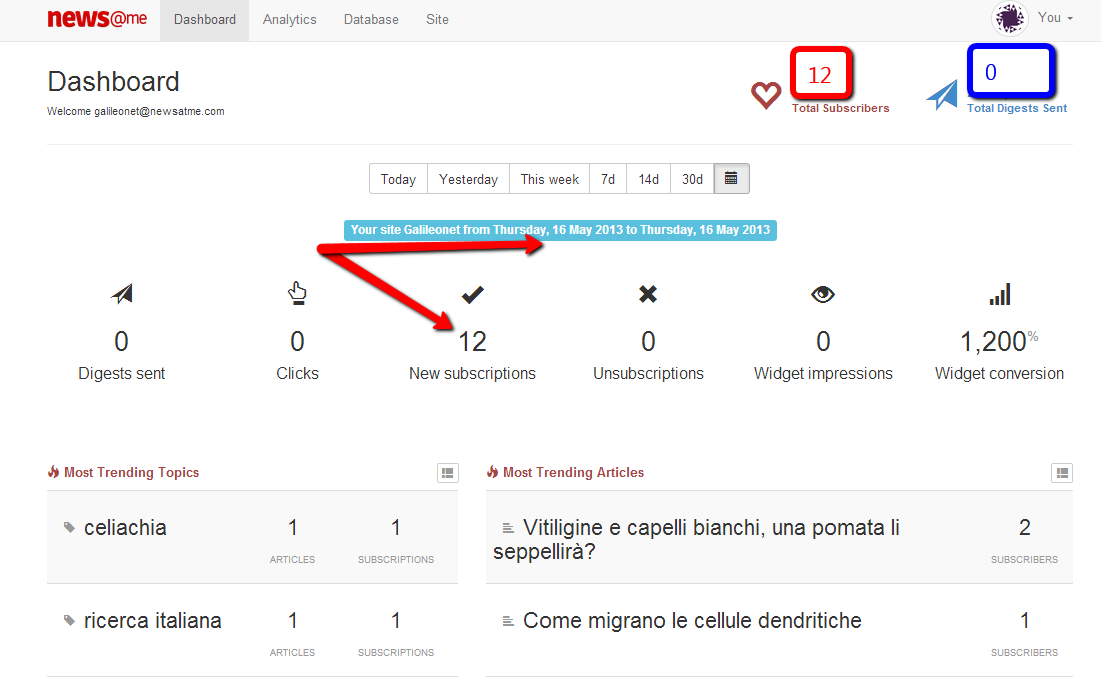 “it was strange because we didn’t expect 12 conversions on day one because we were used to having about 1 or 2 new subscribers a week to our newsletter, we didn’t know exactly what was happening”

Results after the first week

As Galileo was using News@me the number of subscribers was increasing, day by day. By tagging their articles they allowed News@me to send to their readers the first customized digest unique to each of them based on the articles they subscribed to.

The screenshot below shows the typical unique and personalized digest: 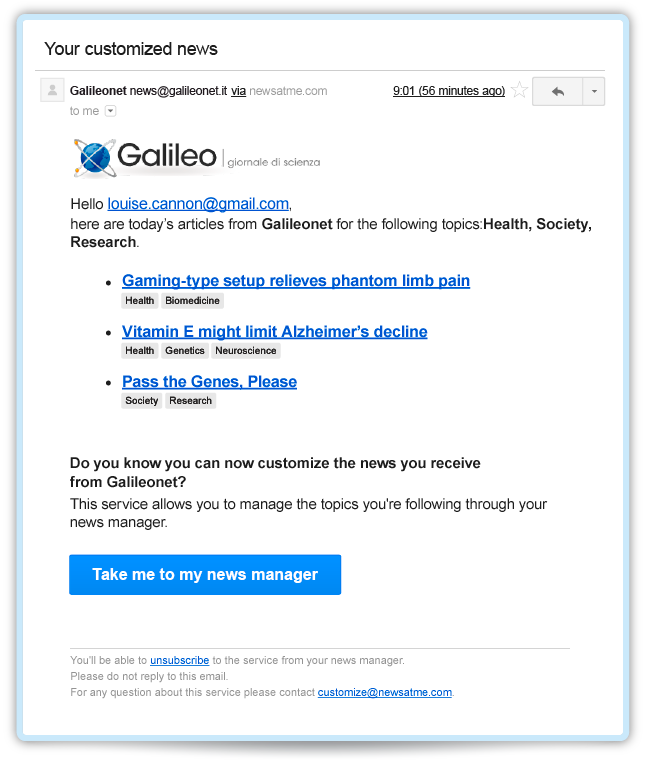 The open rate and click-through rate on the opened email were remarkable, 45% and 35% respectively and Galileo saw the first returning users coming back to the site.

“We saw the response of Galileonet.it users to News@me in this first week. By registering a conversion rate of new subscribers at about 0.4% per pageview we expected around 2,000 subscribers within the first 6 months based on the traffic of the website. This number was exact.”

The screenshots below shows the News@me dashboard with the number of digest sent and other useful data on 3 December 2013:

News@me was sending Galileonet.it readers customized news every day  (every day more digests because the number of subscribers was constantly increasing) and the open rate and CTOR (clicks on the open rate) was always remarkable.

The screenshots below shows the analytics of the first 6 months of the Galileonet.it activity: over 100k Digest sent, 47% Open rate, 36% Click-Through Rate and 17,871 Clicks.

After 6 months News@me became the fourth source of traffic bringing over 6% of the total traffic and ranking on top with the highest rate of returning users at 83%!

The screenshot below shows the top five sources of traffic of Galileonet.it

“What was interesting was the fact that the conversion rate was more or less the same almost everyday, about 0.3% to the pageviews and we were expecting a decrease after some weeks but the decrease never happened.

We also started  to carefully analyze the statistics provided by News@me and we discovered that it was really useful for our editorial activity. Now, every Monday we use News@me analytics and the Google Analytics to understand our users better.”

”Rather impressive was also the use that the readers were making of the News Manager which every reader has and can use to follow and unfollow the articles.”

The screenshots below shows the News Manager, powered by News@me, that allows readers to manage the subscriptions topic by topic: 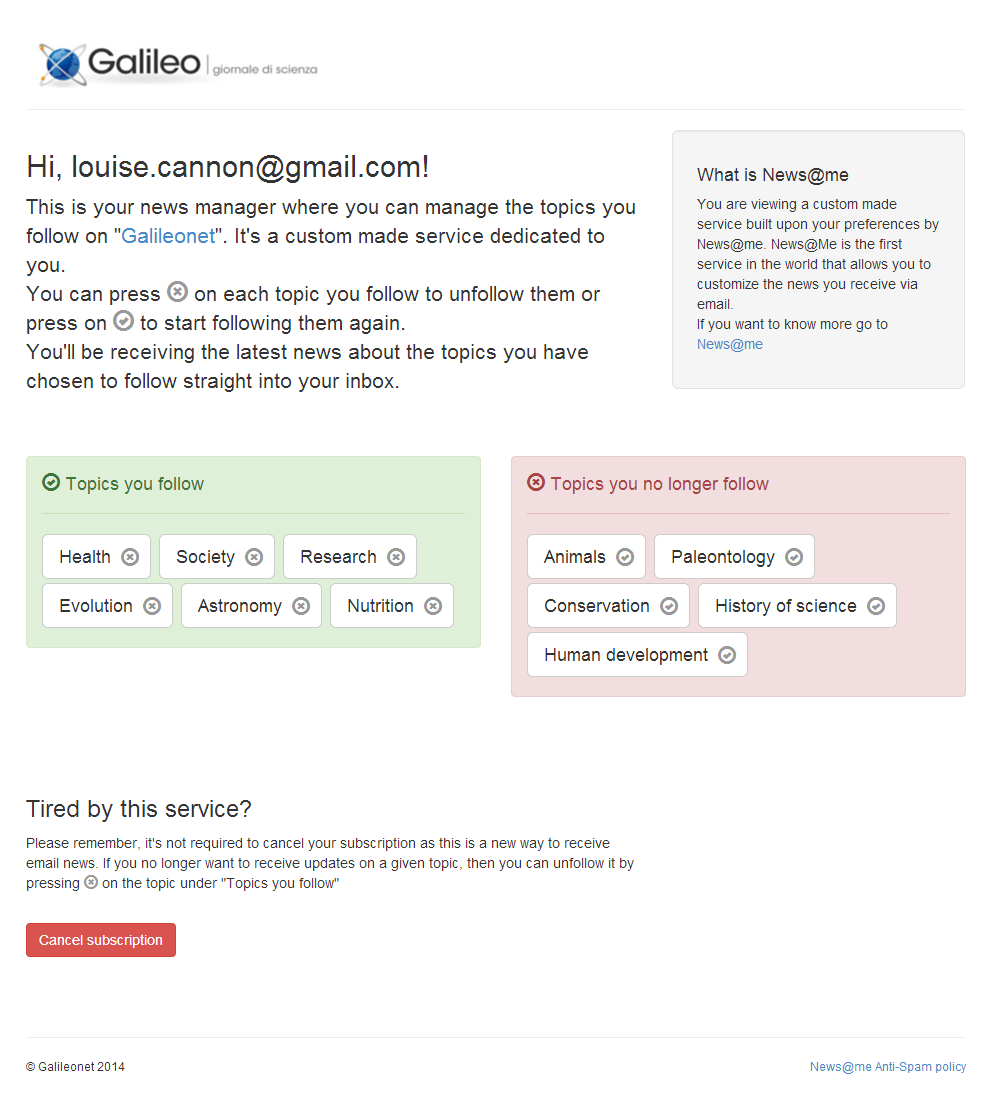 “Thanks to the News@me statistics we were getting a better understanding of the interests of our users and this analysis helped us to improve our editorial activity.”

After 11 months of using News@me Galileonet.it built a solid subscription base of 3,771 unique subscribers and only 271 of them decided to unsubscribe to the service.

The screenshot below shows the overall activity of News@me on Galileonet.it along those 11 months. For instance the digest sent, clicks, subscribers, unsubscribers:

After 11 months Galileonet.it net was able to send over 2,500 targeted emails per day.

Worth noting is also the Churn rate, the percentage of unsubscribers related to the total subscribers as this was bottoming out at 6.7%.

“Instead of leaving the service the readers used their News Manager and decided to follow or unfollow single topics and that was exactly what we had hoped.”

This user’s follow and unfollow the topic activity is shown on the News@me statistics at the section Analytics > Tags.

The screenshots below shows the section Analytics > Tags:

News@me is still driving new subscribers every day to topics and articles and in March 2014 it is Galieonet’s third source of returning traffic, 83% returning readers, completely controlled by Galileonet.it itself. 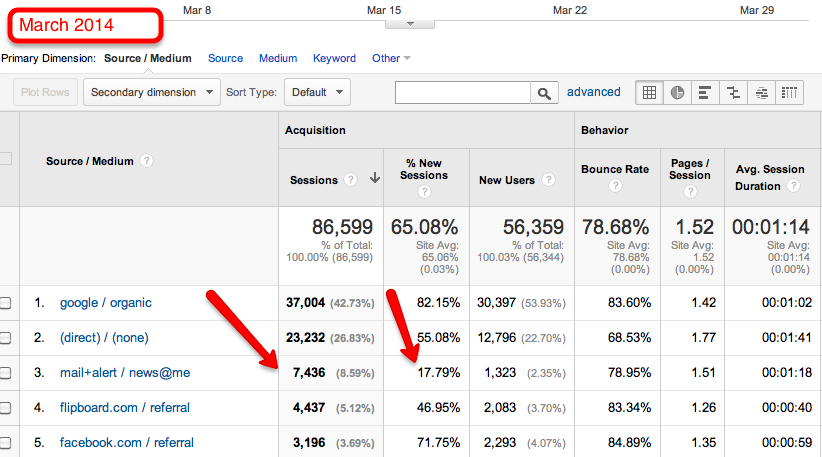 Lessons Learned from this case

The following are keys to successfully running this type of activity:

Asking readers a question at the bottom of every article, with the same look and feel of the rest of the article is a really powerful way to get the full attention of the readers. In fact, in that moment, the focus of the eyes is only on the content of the article, and News@me takes advantage of a part of this focus.

Thanks to the News@me News Manager we saw that people rarely want to unsubscribe completely to a newsletter, especially if they trust the source.

With News@me the readers have more choices, they can stop following just one topic and go on receiving news from the trusted source, only for the topic they care about at that moment in time.

News@me records this readers activity thanks to its News Manager (the activity of following and unfollowing topics) and gives this unique information about the readers back to the online newspaper.

Looking at the 83% of the returning traffic from the News@me source we can see that it is possible to retain traffic, with the right tool. And News@me will be the right tool because it brings the right content to the right people.

Email Open and Click-Through Rates: Benchmarks by Vertical from Marketingprofs.com


What to Look for in an Automated Email System

Double your email subscribers, segment your list and increase traffic.


Discover what your audience wants to read most

Get started
It only takes 60 seconds and no credit card is required.

Interested in seeing what News@me could do for your business? Let us demonstrate the power and ease of News@me on your own site!

Discover what your audience wants to read most

Get started
It only takes 60 seconds and no credit card is required.